LED (Light Emitting Diode) is a new generation of green lighting source, which has many advantages such as energy saving, environmental protection, high brightness and long life. It is not only the new darling of lighting sources, but also related to people's lives. Therefore, the development of long-life driving power supply, the construction of high efficiency, low cost, high power factor and the key to LED lighting quality and overall performance, is also the need for the development of LED lighting technology. According to incomplete statistics, the life of existing incandescent bulbs is about 40 times less than that of LED lamps. Because the light-emitting diode is not only a DC current driving device but also a photoelectric converter, it has a function of converting photoelectricity. Its main function is to convert electric energy into light energy by flowing current, so its advantage is higher than the energy efficiency and working life of the general light source. However, it is generally required to use a large-capacity electrolytic capacitor in the rectifier circuit and the filter circuit of the LED driving power source. The life of an electrolytic capacitor is generally l05 Â° C / 2000 h, which means that when the temperature around the capacitor rises to 105 Â° C, its life is only 84 days, even in the environment of 85 Â° C, the service life is only 332 days, so the electrolysis Capacitance is the main reason that hinders the life of LED driver circuits. In order to improve the life of the driving power supply, it is necessary to remove the electrolytic capacitor. For this reason, a high-brightness LED driving power source without an electrolytic capacitor is proposed.

The overall block diagram of the circuit of this design is shown in Figure 1: 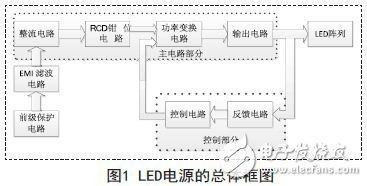 In order to make the circuit less susceptible to electromagnetic interference, the EMI filter circuit is connected to the pre-stage protection circuit, which filters out the higher harmonics in the circuit and the surge in the circuit.

Then, the control circuit adjusts and controls the output to reach the design value. Finally, the output filter circuit reduces the output ripple to DC power, and finally outputs the DC power to the LED.

3. The specific design of the LED drive circuit

As shown in Figure 2, the input circuit includes a safety device, an EMI noise filter, a bridge rectifier circuit, and a Ï€-type filter circuit.

As shown in Figure 2, in order to reduce electromagnetic interference in the 1MHz band, the EMI noise filter circuit is composed of capacitors C1 and C2 and inductors L1 and L2. The safety device consists of a fuse and ZNR. When a spike current is generated, the fuse will quickly cut off the circuit to protect the load. ZNR is a surge absorber. When static electricity and surge occur at the input of the drive circuit, it will It becomes very impedance, so it can protect the circuit behind it. The bridge rectification filter circuit converts alternating current into direct current, and the subsequent Ï€-type filter filters out voltage and current ripples in the circuit.

As can be seen from Figure 4, the noise signal will drop significantly when the frequency is higher than 1KHZ. It can be seen that the circuit can effectively reduce high frequency interference.